Why fashion editorials are no longer important.

Let’s get something straight fashion editorials are more than just pretty pictures in Vogue or Elle or your favourite local fashion rag. They exist as a form of advertising and contrary to popular opinion, not as free advertising. The stylist gets to choose the clothing sure but only from advertisers in the magazine.

Want your clothes featured in a Vogue editorial? Got a couple of million dollars in spare change to buy the advertising? From stylists, models and photographers point of view editorials work great. or although not as effective as they used to be. You just have to climb the mountain of competition first. From a designers point of view ,especially a smaller company such as ours which specialises in slow fashion editorials can be seen as a type of investment. Just not a particularly good type of investment.

The slow death of magazine advertising.

In case you haven’t noticed or have been living under a rock for the past few years the world of magazine publishing has not only been changing but has changed considerably. Magazines no matter what the title – be it Vogue, Car and Driver or Playboy can exist but for one reason and that is to sell advertising space inside the magazine. All the pretty pictures and articles just exist to get you to buy the magazine and look at the ads and hopefully the products. 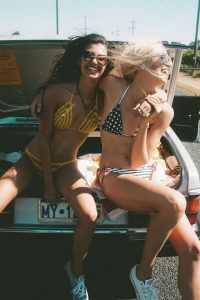 The higher the circulation of the magazine then the more money you can charge for the ads and when the circulation goes into decline then the opposite happens. This why so many magazines have gone broke and disappeared – nobody wants to buy their advertising. Instead, designers want to spend their advertising dollars where the readers are – which is on Facebook, Instagram, Snapchat or reading fashion blogs or on-line magazines such as c -heads .

Spending money you don’t have on pretty pictures nobody is going to see is a good way to send yourself broke because it is not going to lead to increased sales. The same goes for models and other creatives’ – are these photos really going to help your career? Or are just spinning your wheels playing dress-ups?